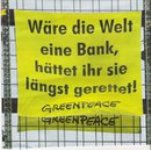 But the deal comes with one condition: that Greece remain on the same route of austerity for at least the next 10 years.

This will cause the country’s social and economic situation to rapidly deteriorate in the near future. The recession will continue, new austerity measures will be introduced and debt repayments will become even more difficult to maintain, while another recapitalisation of the Greek banks will probably be needed shortly. As the leader of the opposition party SYRIZA said in a recent interview with the Guardian, if these policies continue then in ten years, Greece “will have become a no-man’s land”. English: Members of the Socialists and Democrats in the European Parliament protest austerity measures at the Parc du Cinquantenaire in Brussels, Belgium on September 29, 2010. (Photo credit: Wikipedia)

Leben in Griechenland:  As another difficult year for the battered European economy ends, many Greeks are returning to the land to survive.

Good Food for us